Jack Strood is one of our talented animation students here at Bucks. During this past summer he worked on a series of animated videos for Global Publishing Solutions, a company that commissioned some short films as part of a marketing campaign to get its message out to prospective clients.

Lots of companies find it hard to explain exactly to clients what it is that they do - especially in the technology sector - and animation can be the perfect medium to make complex ideas seem clear and easy to understand. We asked Jack (who did the animation) and Alex Hudd (who did the audio work) to talk about the project and how they got involved.

The project was executed by Firebird Films, a company founded by Ross Mackenzie. Ross and Jack did the animation together, choosing a hand-drawn style, using stop-motion techniques and narration to tell the story in a simple but clear way. You can see one of the films below:


GPSL ANIMATION. 1 of 4 (stop-motion on the Sony FS700) from firebird films Ltd. on Vimeo.


Bucks: How did you come to work for Global Publishing Solutions?

Jack:  Global Publishing Solutions (GPSL) was a client of one of my company partners. They recommend me to GPSL.


Alex: Ross Mackenzie of Firebird Films contracted me to do the sound design on the GPSL films. 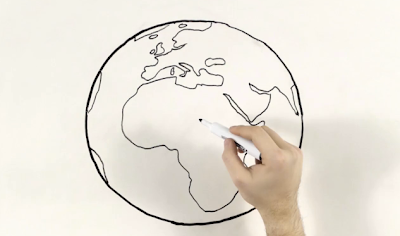 Bucks: Who came up with the idea for the videos?

Jack:  The client wanted to do a mockumentary but I talked them out of it, as I wanted to try animation instead. I had seen some other great animation which really inspired me, and I wanted to have a go myself.

Alex: Ross I think oversaw the visual design of the films. It was left pretty much up to me to sort out the sound design of them.

Bucks: How did you figure out the style of the films?

Jack: After watching series of animations done for the Royal Society for the Encouragement of Art (RSA), I really loved their work and I wanted to adapt their style and also put my own twist on it.

Alex: I wanted to match the sound design to the slightly quirky - but endearing - visual style. And I think we achieved this, in the end.


Bucks: How did you make the films - from a technical point of view?

Jack: The whole idea was really simple. We only used one table, white board markers and some cardboard that we managed to put together. The animation was shot on a Sony FS700 and the lighting we used was simply two defused 800 watt red head bulbs. Oh, and we had a radio.

Alex: I look at the end edit (or work in progress) and decide what needs to be sound-designed. It's important to remember that you don't need to sound-design every little movement or thing that happens. Sometimes the old adage, "less is more" applies! It's all about looking at the whole picture and deciding what would happen at a particular moment in order to bring emotion and a sense of pace to the visuals.

Quite often, sounds will occur in my head just by watching the film, which I then attempt to recreate in the studio using whatever materials I need. Failing that I just use my own mouth to mimic the sounds I need. Once the sounds are recorded I might then need to edit them to fit the picture or re-time it slightly - I try to record the sounds in real time with the picture as this saves time editing; but it's not always possible. I then go through a mix process to level and position the sounds as appropriate in the stereo (or 5.1) space. The final mix is then 'married' with the master picture to make the comp to deliver to the client for review.

Bucks: What is your next project?

Jack: We have just finished 8 animations for Carillion PLC. This project is a bit like the work we did for GPSL but we used lots of different materials instead of just pens.

Alex: We are just finishing off a series of sound designs for a building company called Carillion. My next project is sound design for some Dolby Atmos demos, however there are several more projects in progress that I cannot talk about due to client confidentiality agreements.


Bucks: What advice would you give to students at Bucks looking to take on freelance work?

Jack: One of the most important part of this was the sound design. Alex Hudd designed all the sound on this project and has worked on films like Hot Fuzz. He is 50% of this project as without sound & voice-over there would be no films.

Alex:  Whatever you do, make sure you communicate well with the people you are working with and try not to give false promises on delivery times - it usually takes longer than you think! Never take anything for granted - I'm always learning something new about sound (and the industry!) every day and that for me is the way it should be. Which is why I'm still working in this sector, I guess. Finally, take a pride in your work and make sure you get paid in the end - if you want to make it your career!

I wasn’t an animator before and I had no experience animating. I had shot a lot of films but nothing like this. But I always wanted to give it a good go. Working with Jack on the drawing and animating side has really helped. Two eyes are better than one and we have worked a really good routine working together. Anything is possible if you give it a good try. Just make sure the film is well planned out. And what ever amount of time you think you will need to get it done -  double it.

(Editor's Note: For more excellent work done by our students here at Bucks, check out our latest commercial project for Rocketseed, our short film done for a global aid agency, and take a look at the excellent work of some of our recent graduates, such as designer Monika Dzikowicz, architectural visualisation specialist Krsytof Michalski, Alex Whitfield and the 3D artwork of Mike Swan.)