Starting in the New Year our masters' students tackle DA702, the second animation module on our online masters' degree in 3D animation. Classes start on 5 January 2021.

The module is titled DA702 - Character Performance, and builds up to an entry into the March 11 Second Club competition.
On March 1st 2021 the club's official line of dialogue will be released, and our students have until March 29 to submit their finished work.

DA701 PR1 Assignment Brief
This assignment DA702 PR1 involves entry into the monthly 11 Second Club animation competition. The final animation should be uploaded to your Vimeo channel and then submitted to your tutor via email, along with a single PDF document showing your preparation and planning, such as storyboards and/or thumbnail sketches.

11 Second Club Submission by Jinng Hwee Tan
Below is an example of a strong submission for DA702 PR1 by Bucks MA student Jinng Hwee Tan. Jinng hasn't lit and rendered teh shot, so he will have lost markes for post-production, but the quality of his animation is very strong, and his camera work also works very well.


Schedule
To see the schedule, take a look at the calendar below. The module starts on 4th January 2021, and begins with formative feedback at Animation Apprentice. 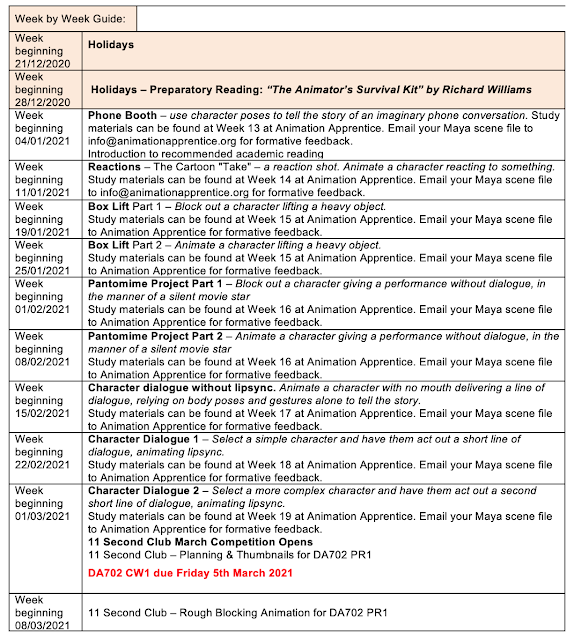 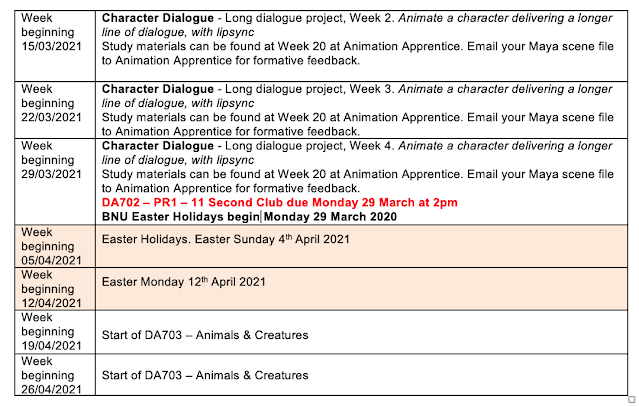 Assignment submission - Please Read!DA702 PR1 is due on Monday 29th March 2021 at 2pm. Please upload your video to YouTube and email the link to me at alex@animationapprentice.org.  Students are also assessed on their development and pre-production, so please attach to the email a single PDF document showing evidence of planning, such as thumbnail sketches and/or live action reference. Alternatively, this can be uploaded to your blog or website.