"Flame" has won multiple awards in recent months, including Best Animation at the LISFF, Best Editor at the "We Make Films Festival" in London and a Five-Star Award at the British International Amateur Film Festival.  Flame was executive produced by BNU graduate Amedeo Beretta. 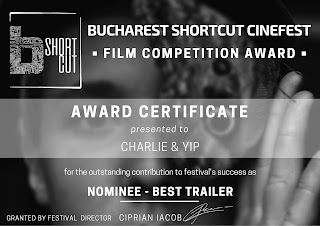 Bucks New Uni tutor Alex Williams' short film "Charlie and Yip" has won an award nomination for Best Trailer at the Bucharest Film Festival.   Charlie and Yip is a short film about a kid who takes his pet to school for Show and Tell, which turns out to be a bad idea.