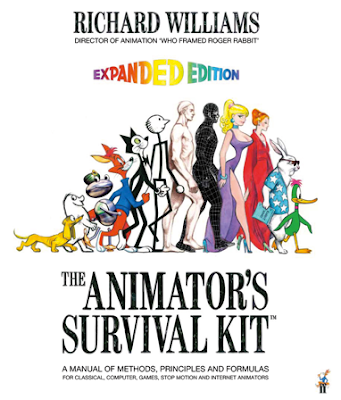 I don't have an iPad, and I don't know what you call a book released for use on it. Is it an iBook? an eBook? An iBook App? An e-iBook? Whatever the name, the iPad seems the perfect platform for a digital version of The Animator's Survival Kit, now the standard industry textbook for aspiring animators.

Dad will be 80 on March 19th, and this new digital update of the ASK, published by Faber and Faber, will be released around then. The app (or whatever it's called) will contain the complete Expanded Edition of the best-selling Survival Kit, optimised for the iPad, along with over 100 animated examples taken from the Survival Kit DVD box set.

Also included will be a previously unreleased 9-minute animation, Circus Drawings, 50 years in the making, plus a bunch of other new material. The animated examples will be viewable frame-by-frame and ‘onion-skinning’ functionality means you can flip it - just like real animation!

I am sure it will be awesome. The original book was wonderful but, being a book - didn't include any actual animation. The DVD boxed set, by contrast, is full of animation but is too expensive for most students, and lacks the ease of reference of a book.

So the iPad must surely be the perfect platform - all the functionality of a book, but with video as well, plus clips to explain the process. What animation student wouldn't want it?  I know I do.

...which means I'll finally have to get myself an iPad.