On 30 June at 6pm Escape Studios is hosting a live animation webinar with legendary Disney and DreamWorks animator James Baxter.
The event is free, and we are recommending that all our students register and sign up.
James began his animation career on Who Framed Roger Rabbit? and has since worked on dozens of animated films.
James Baxter Webinar 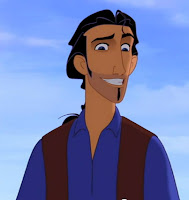 The webinar takes place on Wednesday 30th June at 6pm.  James will take students through a hand-drawn animation demonstration, with a 15-minute Q&A at the end.

James was the animation lead on Belle on Beauty and the Beast, Rafiki on The Lion King, and Quasimodo on The Hunchback of Notre Dame.  He won the Windsor McCay Award at the 2018 Annie Awards, and has worked for Walt Disney Animation Studios, DreamWorks Animation and Netflix. He is widely regarded as one of the masters of the craft of animation.
On a personal note, James was my supervising animator on "The Road to El Dorado", where he designed and supervised the character of "Tulio".

Official Signup
To sign up, follow this link.
James Baxter at IMDB
You can see more about James Baxter at Wikipedia here.
For more on the experience of studying at Bucks New University, come and visit us at one of our Open Days, take a virtual tour of one of our animation studios, check out what our students think of our course, and see why we're ranked in the top 12 creative universities in the UK.
Posted by Alex Williams' Animation Blog at Tuesday, June 22, 2021