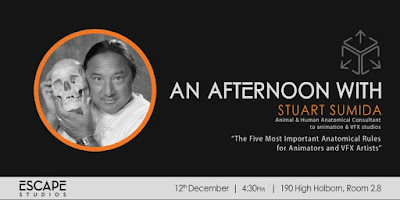 Paleontologist and animal locomotion expert Stuart Sumida will be in London next week, and on Wednesday 12th December at 4.30pm he will be giving a free talk at Escape Studios at 190 High Holborn, London WC1.

Stuart occupies a rare cross-over space between science and entertainment, advising Hollywood studios on the development of movies such as "The Lion King" and "Spirit - Stallion of the Cimarron".

What's this all about?
The talk is titled "The Five Most Important Anatomical Rules for Animators and VFX Artists". Escape Studios organises "An Evening With..." events to give students an insight of the animation and VFX industry, and to meet industry professionals such as Stuart.

About Stuart Sumida
Paleontologist and animal locomotion expert Stuart Sumida has been to Escape Studios before; in 2017 they hosted over 60 artists from Framestore at their Shepherd's Bush campus as they attended a masterclass in animal anatomy.  Stuart's specialist area for animators and VFX artists is about how to make more believable and authentic animals and creatures in film.  Stuart's visit is a reminder of how technical the business of animating animals and creatures has become. Science and animation now overlap more than ever before.

Consulting on films
I was lucky enough to work with Stuart on two feature films; on Lion King, where he led the animators on accurate animal anatomy, and on Spirit, Stallion of the Cimmaron, where he did extensive talks on horse anatomy, locomotion and gaits.

On both movies it was very important that the animators become experts in how the animals moved; only by fully absorbing the fundamentals of locomotion and gait could we move beyond basic principles of motion into acting and performance.

In November 2015 I caught up with one of Stuart's talks about animal and creature locomotion. You can read my notes from the talk here.

Book online
To book your place, follow this link