On Tuesday 26 January at 11.30am I'll be interviewing Charlotte Gimbird, one of my most entrepreneurial animation students.
The webinar is hosted by Escape Studios, and features undergraduate animation student Charlotte Gimbird, creator of QC Animations.  QC Animations is a YouTube Channel with over 80,000 subscribers, and hundreds of thousands of views every month.  To see how Charlotte has created her own successful animation business out of thin air, sign up for the free webinar here.
QC Animations
QC Animations is built about the world of Minecraft - the world's most popular video game, around which she has built a successful online business.  In this webinar we will be talking to Charlotte about how she created QC Animations, what success at YouTube means, and how our students can get involved in this rapidly expanding part of the animation business.  You can sign up for the free webinar here.  You can also find out more about it here at the e-scape hub.

Charlotte Ann Gimbird is a second year undergraduate animation student at Escape Studios, studying the Art of Computer Animation. We asked Charlotte a few questions about QC Animations, and how it came into being.

When did you start QC Animations?
My YouTube Channel QC Animations was created in August 2015, a month before I turned 15.  At first it was a Minecraft roleplay/gaming channel for about two years; then I moved into Minecraft animation.  I uploaded my first animation on the 12th of February 2017 and have been doing them ever since.

What was your inspiration?
I was initially inspired by other Minecraft Animation YouTubers, and also the older Minecraft channels that did music videos/animation shorts, such as Captainsparklez, Mineworks, SkyDoesMinecraft & Slamacow.

At what point did you know it was going to be a success?
I didn't know in the beginning that it was going to do so well. It began as a hobby and gradually evolved into something bigger, and it is still growing.
Who are your characters, and what are their stories?
I have quite a few of them, because I used to design a lot of them when I was younger. The main two characters are Azriel Ropert Ligenson and Azara Ann Ligenson; they are twins.
Azara Ann Ligenson
Azara's story consists of demons, because I always had an interest in them.   I made my first series with Azara and called it The Last Soul (TLS).  In Azara's story, she gets possessed by a demon called Annabel and she lives a life in her body, and is renamed Queen Charia Ann Ligenson.
After she nearly died in a car accident, the demon saved her life, and now she has other demons after her because Annabel is a special type of demon in TLS.  The main antagonist is called Lucifer and he's the one going after her.

Azriel Ropert Ligenson
Azriel's story is real-life based, and his character links a bit more into my personal life and some of the problems I have faced. Azriel's series is called Into The Shadows (ITS), and it is the second series on my channel.  In Azriel's series, he is a member of a gang called Triple Cross and they get involved with the kind of stuff you can't get away with in real life.
In his story, Azara dies and demons don't exist.  Azriel is also pretty famous in his story, and the town he lives in knows his name because he is a famous music producer and rapper.  It's really a police documentary about his past life and he is telling a story of how he got caught.

Who models and rigs the characters?
I design the characters and then my boyfriend Michael does all of the rigging, modelling lighting and editing. I have a team called QCProductions and some people in that team model and rig for me too.
What hardware and software do you use?
Hardware: Custom Build PC, Ryzen 7 2700, including 16 Gb RAM, GTX 1060 6 Gb,  256 SSD; 1 TB harddrive. 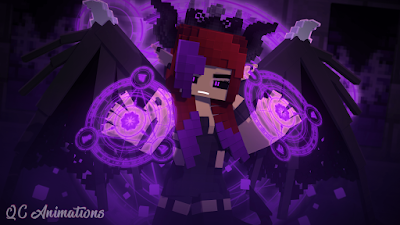 Software:
Mine-imator (obsolete), Maya, Adobe After Effects, Adobe Media Encoder, Adobe Premiere, Houdini (planned), Davinci Resolve 17 Fusion (planned), Photoshop, Asperite, FireAlpaca. To render the work we use FoxRenderfarm.
How does YouTube Animation work?
It all depends on how much you put into it; you have to work hard to make it a success. The main challenge with YouTube is you have to upload something monthly - otherwise Youtube sees you as a dead channel and it stops promoting you.

What advice would you offer to a student at Escape Studios who wants to start their own animation channel at YouTube?

If you can't handle criticism, don't do it, because you will receive a lot of it.  If you can't manage your time, don't do it - because it is quite time consuming.  If you are not enthusiastic enough or confident about releasing your work to the public, it's not the best option.

However in all honesty, it's a really fun career path.  It can be tough at first - but it gets better.  I've grown from nothing to something and people enjoy watching my stuff.  I have fun animating music videos because they are passion projects.   If you really have fun with something and you enjoy it you keep at it, no matter who likes it and who doesn't.  If you like doing it, and the positives outweigh the negatives, then it's a really easy way to make a portfolio and even potentially a career.
--- Charlotte Ann Gimbird