DA701 Animation Mechanics is the first module that our new MA animation students (those starting with us in September) will encounter at Bucks.

DA701 starts on 27 September 2021, and is taught primarily in Autodesk Maya. The module deals with animation basics, such as locomotion and mechanics.

It starts with simple actions such as a bouncing ball, and builds up to more complex physical actions, such as jumps and throws. There are two assignments due: DA701 PR1, and DA701 CW1. DA701 PR1 is due on Friday 10th December at 2pm.

DA701 Animation Mechanics
Animation Mechanics is an introductory module (worth 30 credits) in which students learn the basics of 3D animation. The module begins with a basic introduction to the Maya interface, and is followed by basic mechanics exercises such as the bouncing ball.

Walks, Runs & Jumps
Students then tackle lomocotion, starting with walks, character walks, and runs, and then move onto more complex physical actions such as jumps, weight shifts, and exercises in flexibility. The module culminates in an assessed locomotion exercise.

DA701 Assessement
There are two assessed assignments to submit:

DA701 PR1 - Character Locomotion
DA701 PR1 is an exercise based on character locomotion. The brief is to create a number of character walk cycles and then combine them into one shot to create a performance.

Suggestions might include a parade, a Sunday stroll, an army on the march, or people commuting. Ideally there should be a story-telling element, and the piece should include sound effects and music. The piece should be around ten seconds long.

Class Schedule
Class begins on 27 September 2021, though students are encouraged to start earlier by reading the core text "The Animator's Survival Kit" by Richard Williams, and start to learn the Maya user interface. 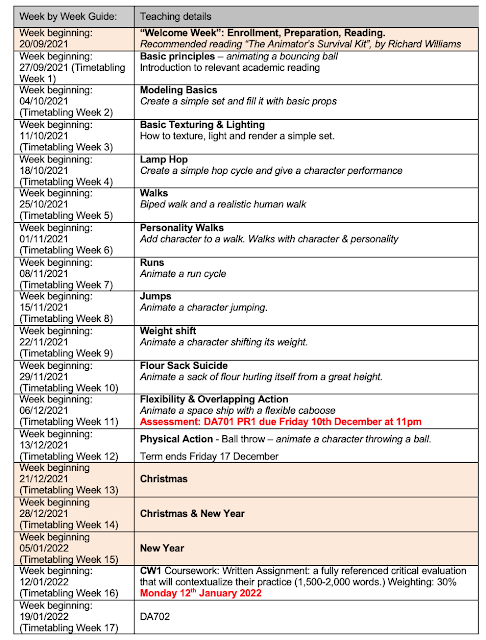 Student work
To see some examples of work in this module, watch the videos below.

Circus Comes to Town by Neil Whitman
Neil Whitman animated "Monty" as a parade of circus clowns, in the imaginative piece below.

School Run by Lee Caller
Lee Caller animated a series of alien characters heading off to school one morning.


Assignment submission
DA701 PR1 is due on Friday 10th December 2021 at 2pm. Please upload your video to YouTube and email the link to me at alex@animationapprentice.org  Students are also assessed on their development and pre-production, so please attach to the email a single PDF document showing evidence of planning, such as thumbnail sketches and/or live action reference.  Alternatively, this can be uploaded to your blog or website.

Assesssment Criteria
Creativity & Pre-Production– 25%
Powers of imagination – powers of invention/innovation both practical and visual – ability to generate a broad range of ideas – ability to select the best idea and refine it ready for production. Is the idea selected appropriate for the brief? Thumbnail sketches, storyboards and/or live action reference.

Post-production – 25%
Has a successful final render been created? Have titles and credits been used appropriately? Has sound and/or music been applied successfully? Is the sound clear?

Late Submissions
We strongly encourage all our students to submit their assignments on time, ideally well before the deadline. Students can get feedback at our Facebook Classroom at any time, and are strongly encouraged to send work in progress for review prior to the submission date.  If your submission is late, you will need to apply for Mitigating Circumstances. To find out more, read this post.
Intro to DA701 with Alex Williams
To find out more about this module, watch the video below.


Locomotion Resources
For resources on locomotion generally, see the blog posts below:
For more on the experience of studying at Buckinghamshire New University, come and visit us at one of our Open Days, take a virtual tour of one of our animation studios, check out what our students think of our course, and see why we're ranked in the top 12 creative universities in the UK.
Posted by Alex Williams' Animation Blog at Tuesday, July 06, 2021