Congratulations to the makers of "The Float Folks", the short teaser/trailer made at BNU by our animation students, which has won "Best Animated Trailer" at the Art Film Awards.
The Float Folks is an animated TV Series created by Ian Foyle and directed by Monika Dzikowicz, currently in development.  The Float Folks has won many festival awards. 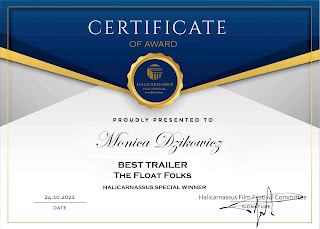 Credits
The Float Folks was designed and directed by Bucks Animation graduate Monika Dzikowicz.
Music was composed by Bucks undergraduate Scott Benson, based on the original song by creator Ian Foyle.
Sound design was by Kris Allen.
Animation was completed by  Lydon Fleisig, Dave Berry, Paula Gillin, Allan De Leal and Kalim Momen.
Festival Success
This is the latest award for the Float Folks, which recently won
For more on the experience of studying at Bucks New University, come and visit us at one of our Open Days,  take a virtual tour of one of our animation studios, check out what our students think of our course, and see why we're ranked in the top 12 creative universities in the UK.