Congratulations to BNU animation student Kristis Bandzevicius whose animated short "Artifact" has won a "Special Mention" at the One Reeler Film Festival.
"Artifact" is a short film created by BNU animation student Kristis Bandzevicius.   "Artifact" was written, produced and directed by Kristis, currently studying for his MA in 3D Animation at Bucks.   This is the film's third festival award.
Artifact
You can watch Artifact below.
Inspiration for "Artifact" 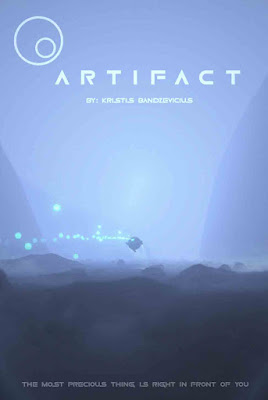 Inspired by the immersive, dark and gloomy atmosphere of video games such as "Inside", director Kristis Bandzevicius wanted to tell a story "based on surroundings rather than using dialogue", a simple tale of "a lonely robot in a desolate world, searching for any signs of life."
"Artifact" was created as part of the final module of the Master's Degree in 3D Animation at BNU, Module DA704, which involves the creation of a final project and demo reel.
Artifact at IMDB
You can find "Artifact" at the IMDB.
Festival Success
This is the third award for Artifact, which has already won
For more on the experience of studying at Bucks New University, come and visit us at one of our Open Days, take a virtual tour of one of our animation studios, check out what our students think of our course, and see why we're ranked in the top 12 creative universities in the UK.
Posted by Alex Williams' Animation Blog at Friday, February 25, 2022