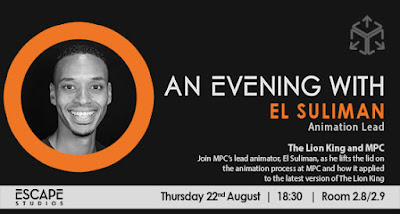 El Suliman, animation lead on The Lion King, is giving a talk in London on 27th August about his work on the film.

El works for MPC, the VFX powerhouse that did all the animation on the smash hit movie.

As ever, we recommend that all our students attend events like this one; they are a window into the animation production process and also great opportunities for industry networking.

Our online MA in 3D Animation at Bucks New University is a unique course, still the only online MA in animation in the world.

Priced at just £7,200 for the full 18 months, it is a gateway to a career in the animation industry and also a passport to teaching animation at university level.

Inside the MA are five modules; four run consecutively throughout the year, and the final module runs for the full 18 months of the course.

Last Call for our Online MA in 3D Animation 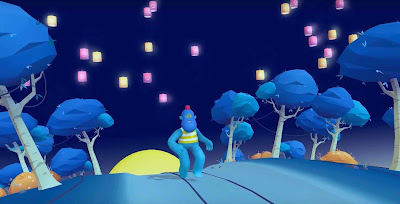 Last call for applications for our online MA in animation; we still have a couple of spots open for September 2019.

This online MA is a unique degree which can be undertaken by students anywhere in the world, leading to a formal qualification in the field.

Students learn how to animate to a professional industry standard using Autodesk Maya, the industry-standard software, and also learn to engage with the underpinning theory and structure behind the art form.

The Making of "Venom"

Troy Saliba, animation director at Double Negative, gave a talk in London earlier this year, to talk about his work on the blockbuster release: Venom.

Troy was my animation director on "Monster House", way back in 2005, so it was a pleasure for me to see him again, and welcome him to London, where he is now working for DNeg in Soho.

Troy's talk was a masterclass in how animators work alongside VFX artists on FX-heavy films, where the final result, with all the FX work added, can often look quite different to the animator's initial keyframe animation.

The result is that, on films like Venom, animation and FX are heavily interlaced, requiring careful collaboration between departments, and plenty of back-and-forth to get the right final result.

Interested in learning 3D animation, but not sure you want to commit to an entire course of study? I'm running an Animation Taster Day in London on 7th August, hosted at Escape Studios in Central London, for anyone who wants to try out the software and see if it's for them.

Taster Days are a great chance to learn about character and creature animation, and find out what an animator's job is all about.

You will learn how to use Autodesk Maya and get a hands-on introduction to 3D Animation techniques; the full day costs just £25, and by the end of the day you'll have your own piece of creature animation uploaded to your YouTube channel.  No prior knowledge of Maya - or any software - is required.

This is very good news indeed for prospective students who would like to go on to do post-graduate study with us, who can borrow up to £10,906, if the course starts on or after 1 August 2019.  So, how does the system actually work?

Nickelodeon Explains The Art of The Pitch

Animation veteran David Steinberg from Nickelodeon made a great presentation at this year's Annecy animation festival, on how to pitch animation ideas to Nickelodeon.

Nickelodeon (known as "Nick") does most of its design and creation in house, but the "meat and potatoes" of animation is usually subcontracted out to other studios, often overseas, around the world.

Our animation students at Bucks don't just learn how to be competent, industry-ready animators. They also learn creativity, and how to generate ideas. After all, it's up to our students to create the next big thing - the next Peppa Pig or Bob the Builder.  Animation is about stories, characters, and creativity.  So, what does Nickelodeon ("Nick", for short) look for in an animation pitch?