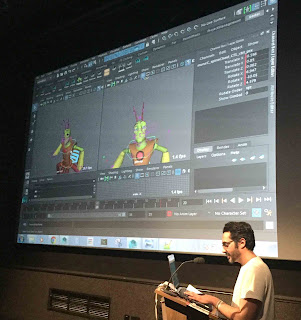 At the recent VFX Festival at Rich Mix in London, Blue Zoo's Tom Box introduced one of their animation directors to give a Masterclass in Cartoony Animation. Blue Zoo does all kinds of different styles of animation, trying "not to get known for just one style", but much of their work is done for TV format, where schedules are punishing and animators have to work fast.

Blue Zoo have to be creative, efficient, and find ways to stay competitive - even in a high-cost city like London, where rents and wages are much higher than overseas.

They also encourage their staff to get involved creatively, developing in-house projects which can be brought to the screen, and also doing short films - BZ Shorts - within the studio, developing new styles of animation and experimenting with new ways of doing things.

So what are Blue Zoo's secrets for a fast, efficient animation workflow?

Learning timing from the masters
The masterclass itself was done in Maya by Blue Zoo animation director Bader Badruddin. He started out in the industry working in Tokyo on a 2D animation production, where the animators were given pre-timed "dope sheets", prepared by lead animators in Los Angeles who timed out the individual shots, spelling out in detail exactly how many frames each action would take.

Bader decided to "run an experiment, blindly following the instructions in the dope sheets exactly", and see how it would come out. The result was "it came out "90% accurate".

Impressed by the American animators' thorough understanding of timing, Bader worked to develop this system himself, creating a "timing template" to speed up his own workflow.

TV Animation - fast schedules
Bader showed some of his work from TreeFu Tom, explaining that TV animation has to "move very quickly".  Everything is done on stepped keys - and once you press spline, you "should be pretty much done". You can't leave the overlapping animation to the end, because there isn't enough time. And there isn't time to shoot much live action reference - "we don't have that luxury".

On TV shows, you can't think "I'll fix this later". You have to "do it now".  Plus, the story panels probably won't help you much either, as the board artists have to work super fast as well, without much time to develop poses.

TV animation is all about speed and efficiency.  One useful tool is the Tween Machine - a super useful tool for use with Stepped Keys.  One thing that Bader always advises his animators is "if you're going from A to B, go somewhere else in-between" (advice also given by Richard Williams in the Animator's Survival Kit).  And "you don't need to use the Graph Editor". Bader doesn't really use it that much; it just slows him down.

Using Maya, Bader showed how to use squash and stretch on his breakdown poses to "create a smear frame", creating a drag effect, a kind of cartoony timing to create a sense of a rapid transition.  As he talked about this I thought "just like Eric Goldberg's Genie in Aladdin".

And then Bader showed the clip "You'll never have a friend like me", Eric Goldberg's animation of the Genie in Aladdin - the same clip I always show students to illustrate the power of comic timing in animation.

To get the character of Muru, the praying mantis in Tree Fu Tom, Bader studied Bruce Lee interviews to get an idea of how the character might behave.

Bruce Lee is "very animated when he talks", and he talks out of the side of his mouth a lot, with "lots of raised eyebrows and animated expressions".

I asked Bader "how many seconds of animation do Blue Zoo animators have to do a week?". The answer was "it depends", but "around 7-8 seconds a day", or "40 seconds a week".

That's a lot more than I ever had to do at Disney and DreamWorks. Hats off to the Blue Zoo team for producing such quality work at such a punishing pace.