What Is Wrong With The Global Development Organisation? 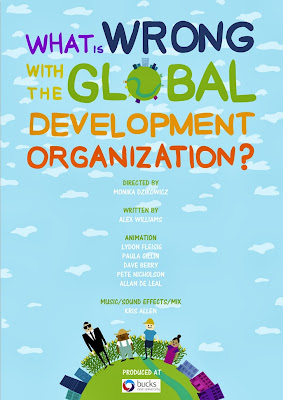 Back in June we blogged about a new film project here at Bucks, a collaboration among some of our recent graduates on a short film with a worthy goal - to tell the story of how organisations that set out to do good work can lose sight of their guiding principles.

The film was directed by Monika Dzikowicz, and animated by Lydon Fleisig, Dave Berry, Peter Nicholson, Paula Gillin and Allan De Leal. Sound design was done by Kris Allen - showing how different departments at Bucks can combine forces to do great work. Everyone spent a good chunk of their summer toiling over their laptops, with the result that the film is now - at last! - finished.

Our film is a two minute micro-documentary about a fictitious aid organisation with some very big problems. Bureaucratic capture is a potential hazard of all companies, but is especially dangerous when the organisation seeks to remedy urgent social needs in the developing world.

What would such an organisation look like if development experts and management worked together co-operatively to help make the world a better place?

Our goal is to do many more films like this, short documentaries that can be made on very small budgets, and which utilise our students' exceptional talents. We want to make Bucks a hub for talented film-makers and animators, showcasing their skills to the world.

Below is what the client had to say about the project:
"I owe you a very large thanks for the great work you and your team did on the animation.  The feedback was incredible. Our No2 summed it u well…."iconoclastic….irreverent…..hilarious……us."