Animation, Drawing, and Lowry at The Tate 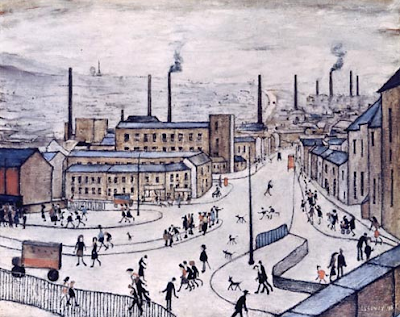 Do animators need to learn to draw? And should they be connosseurs of fine art? Art Babbitt, one of Disney's greatest animators, and the man who led the strike against Disney in 1941, certainly thought so. He argued that an animator should be familiar with all the arts - drawing, painting, music, even grand opera. Chuck Jones would have agreed - some of his funniest shorts such as What's Opera Doc? and The Rabbit of Seville are satires of famous operas. Other animators, such as John Kricfalusi (the genius who created Ren and Stimpy) think this is all pretentious crap.

Here at Bucks we think our students should receive a full artistic education. That's why we teach life drawing, and encourage our students to learn traditional media like drawing and painting - in short, to become well-rounded, highly capable digital artists.

One of the best things about Bucks is our proximity to London. The capital city, with all its art and culture, is only half an hour by bus down the M40. Right now the Tate is celebrating the work of LS Lowry, the English painter whose work was for years ignored by the art establishment as impossibly naive folk art. Today, Lowry's work is celebrated and valued - and the exhibition at The Tate seems long overdue.

Below is an excellent short film about Lowry's work, by indie producer Eddie Morgan's Northern Town production house. We encourage all our students to go and see Lowry's show at the Tate, and also to participate in all the cultural benefits that come with being near London.

Get out there and soak up some culture.

(Editor's note:  Lowry and the Painting of Modern Life is now on at the Tate Britain. The Exhibition runs from 26 June – 20 October 2013. For more details see the official Tate Britain site.)