Graduate Panel at Bucks on Thursday at 3pm - Who's Coming?

Thursday September 25th is our latest graduate panel, where we bring back Bucks graduates who have made it in the creative industries to hear about the latest trends in creative media, and to help our students gain an early understanding of what it takes to launch their own careers. It takes place at 3pm in the Gateway Lecture Theatre. Talks like this can be vital in terms of bridging the gap between university and the world of commerce. So, who is coming on Thursday? 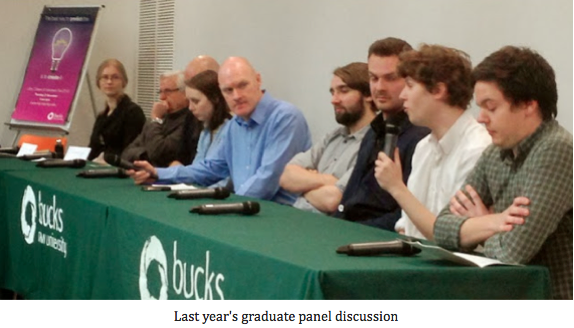 Ben is a Bucks animation graduate with two years studio experience as a designer working on projects from initial ideas, concepts & strategy right through to launch. Ben has been designing at United Agency for the past two years, and having been the creative lead for just over a year now is responsible for the overall visual design of all of the big campaigns, app designs & brand identity. Together with the development team Ben works collaboratively to help design and shape the user experience and user interface across an array of projects.

Simon is a producer/director/editor/media trainer, is experienced in all areas of programme making and production and has a wide variety of industry skills and experience. Production credits include being AD on the World Athletic Championships in Athens, which was broadcast live to an audience of 20 million and was commended in its home country of Greece. Simon helped set up the interactive newsroom at ‘The Telegraph’ newspaper and trained print journalists to adapt to a multimedia environment. For two years he was a producer/broadcast journalist for the BBC’s flagship technology programme Click, writing, producing, and shooting features for the show which is broadcast on BBC World and News 24 to a world audience in excess of 100 million.

Lorna is a very experienced television professional who has worked as a director, vision-mixer, cameraman, P.A. and Technical Manger for over 30 years across all genres of live and recorded programming. More recently Lorna has specialized in news and sport output and currently work for the Premiere League (IMG) and several production companies that have covered events such as the Commonwealth Games, London 2012 Olympics and Wimbledon Tennis. As a director Lorna has worked for likes of ESPN, BBC World, IMG/TWI, Eurosport, Al Jazeera, Sky and Channel. Programme output over recent years has included Wimbledon Tennis Championships (2010, 2011, 2012), Bundesliga, Serie A, Erevidisie, International football, Europa Cup, Aviva Premiership Rugby, FA Cup football and an array of news output.

Matt works for Halo Post Production, who make factual and comedy TV. Programmes include Outnumbered, Mrs Brown’s Boys and Richard Hammond’s How to Build a Planet.

John is the CEO of Brassneck TV, the independent production company he founded in London in 2008. He has created and executive produced many hours of factual television, including Exposed, now in its third series on Sky Arts and sold to over 40 countries worldwide. His director credits include the Banff-nominated Sport Matters: One Night in May for Sky 1 and the History Channel's most watched UK programme Hillsborough Remembered. He has also produced a string of music and arts documentaries for the BBC and Channel 4.

Tammy Riley-Smith is an award-winning writer-director. Her debut feature, Delicious, starring Louise Brealey & Sheila Hancock, was premiered at the Busan International Film Festival in South Korea. It was officially selected for Vilnius, Miami and Nantes Film Festivals before its theatrical and digital release in summer 2014. It reached no.2 in the iTunes romantic chart, and is still listing in the top 100.

Her short film, Ain’t Misbehavin’, won the Kodak Short Film Prize, an award from Turner Classic Movies and was selected for 11 international film festivals, including Cannes 2001. Tammy won WFTV’s Directing Change Award in 2003, working as trainee director to John Madden on Proof, starring Gwyneth Paltrow and Anthony Hopkins. Previously she was a Development Executive at Working Title Films, Assistant to producer Alison Owen on romantic drama Moonlight and Valentino, and Director’s Assistant to Mark Joffe on romantic comedy, The Matchmaker.