The International Festival of Animation at Annecy is the world’s biggest animation festival. It can be a slightly overwhelming experience; there are so many things going on at once that it can be hard to feel like you really get to make the most of being there. Alongside the film festival is MIFA – the world’s biggest animation marketplace, a brain-boiling congress of industry types furiously buying and selling. But Annecy is an event that we believe that every animator should go to at least once – if only to get a feeling for the sheer size and diversity of the modern animation industry.


Annecy itself is a lovely little mountain town in the French Alps. Beautiful scenery assaults you at every turn, and the town is grouped around the northern end of Lake Annecy, which has a luminous blue-green colour that seductively invites you to jump in. Fed up with animation screenings? Why not go for a swim? Or rent a boat and go out into the middle of the lake for some scenery and solitude.

In the evening the locals stroll up and down the streets of the old town, enjoying drinks and ice cream cones, seeing and being seen. It’s all very civilized, like the passeggiata in Italian hill towns – everyone is out seeing their friends and exchanging gossip before heading home for Mama’s pasta.

At night students and animators congregate around the Café Des Arts in the old part of town; a spit and sawdust bar serving beer by the bucket that feels like a Soho pub - and is just as crowded. When that closes, the Captain’s Bar is still open for the late night revellers with the stamina to keep going.


Part of the pleasure is running into random industry colleagues you haven’t seen in years. I could easily have spent most of my time there just chatting to old friends. There is a constant stream of people walking along the lake between MIFA, hosted by the Imperial Hotel on the east side of the lake, and the Festival, which is held at the Bonlieu centre on the west side near the old part of town. It's about a 20-25 minute walk between the two. Not a long walk, but you don't want to be doing it 5 times a day. 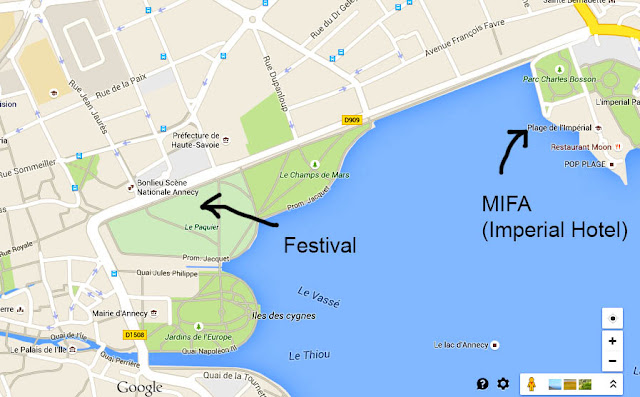 My top Annecy survival tip, handed to me by Film London producer Bob Thompson, is this: get a bike. Annecy isn’t a big place, but since the film festival and MIFA are at different ends of the lake, a bike shaves 15 minutes off the journey from one end to another. €10 a day will get you your own private bicycle and a lock – then you can go wherever you want. I found myself speeding up and down from meeting to meeting – never more than ten minutes away from any part of town.

The nicest place I found to eat was L’Estaminet – a French Bistro in the old part of town, serving moules mariniere and traditional local dishes. Everything gets booked up fast – in fact, reservations seem to be vital for just about everything you want to do, including screenings. And don’t even think of getting lunch at 1pm anywhere in town without a booking.

This goes for hotels too – book early, and stay in the centre of town. The only reason I found anywhere to stay at the last minute when I organised my trip (way too late) was through AirBnB, which released a trickle of rooms long after all the official hotel rooms had gone.

And you must book the official festival shuttle from Geneva airport in advance. The shuttle (en Francais, Navette) to and from Geneva costs €70, which might sound like a lot, but a cab from the airport to Annecy costs a breathtaking €240 for a half hour journey one way. So a round trip by cab will break your budget for the whole week.


The Imperial Hotel plays host to the MIFA and it is indeed grand and imperial – a vast belle epoch mansion big enough (just) to accommodate the hordes of animated visitors.  Even so, the bar gets crowded, and if you want a quiet chat the best place to go is the golf course next door.

Yes, the smart money is on crazy golf – there you will find a quiet oasis a few yards from MIFA - with no industry bigwigs fighting you for a chair at a coffee table. For some reason it's also where the Irish tend to hang out.


The public park on the south side of the lake, Le Jardin De L'Europe, at Le Quai Napoleoon III, played host to various picnics – easily the best way to connect with lots of old friends.  DreamWorks’ indomitable Shelley Page organized a picnic on Friday, the last day of MIFA, where LA visitors and DreamWorks VIPS happily mingled with European animators.

I was there promoting our new Online MA in Animation - the very first of its kind in the world. It wasn't hard to sell it - no-one else is offering anything like it and it's the perfect way of getting a formal qualification without having to leave your home and your job. What's more, it's a part-time course, so it can be fitted in around other commitments, like having a life.

Next year I think I’ll stay a bit longer, probably over the weekend, and perhaps rent a boat for a day or go hiking in the mountains. I didn’t really get to enjoy any of the pleasures of the town beyond going to meetings, talking to students, and attending animation events.

For more on the experience of studying at Bucks New University, come and visit us at one of our Open Days, take a virtual tour of one of our animation studios, check out what our students think of our course, and see why we're ranked in the top 12 creative universities in the UK. Find out why we're giving free laptops to all our students, and why we give all our students free access to videos at Lynda.com. Also, see what financial assistance might be available to you. Learn which is better for animation, a PC or a Mac? Get hold of a copy of a map so you can find your way around campus, and learn aboutmotion capture at Bucks.