The Making of Detective Pikachu

At last week's VFX festival in London, Framestore's Jonathan Fawkner gave a talk on the Making of Detective Pikachu, a movie which was filmed in London and which used the talents of two of the UK's top VFX houses, Framestore and MPC.

It's the kind of talk that we encourage all our students to attend, because of the insights to be gained from understanding the challenges of the animation pipeline within a big VFX project.

One of the big challenges on the film was the take the original Pokemon 2D artwork, and create characters which could be fitted into a photoreal VFX environment.

If you think that's an easy task, consider the trouble caused by the recent release of the trailer for the Sonic the Hedgehog movie, in which a fan rebellion against the look and feel of Sonic led to a bottom-up re-design of the character.

Taking the original Pokemon characters to the big screen wasn't simple, and took a lot of careful development.

Visual Development
Pikachu is an iconic Pokemon - he is the most easily identifiable; quite different to the naturalistic animals that Framestore are used to making.

The Pokemon company was heavily involved in the look and feel of the movie from the start, and they needed to sign off on all the characters and the VFX work. Framestore are used to creating photo-real animals and creatures, but the Pokemon company wanted their characters to be as cute as possible - just like the original hand-drawn designs.

Gengar
Characters like Gengar posed a special problem; Gengar is basically "just a balloon", and Framestore had to do a lot of development work to find a style that could fit inside a photo-real world, but was also true to the character.

They also had the challenge of working on assets alongside MPC; both studios had different pipelines and used different assets to create their Pikachu animation. 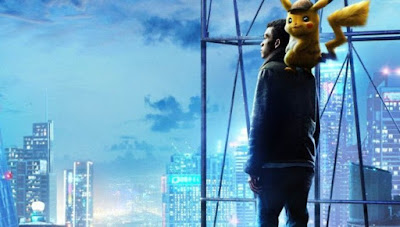 Animation development
While the characters were being designed, the animators shot live-action reference to help get the acting and performance right.  They developed each individual characters; how they would move, how each one would behave.

Special effects
For the live-action shoot, stuffed Pokemon toys ("stuffies") were created for the actors to interact with. They stuffies were removed and replaced by digital work for the final shots, but having a stuffed toy on the physical set helped the actors get the performance and the eyelines right.

Previs
For the big fight scene, Framestore invested a lot of time in pre-vis and Sketch-vis; the latter a hand-drawn layer on top of the live-action plates, to help the director imagine where the final animation will go. The sketch-vis pass was very rough, but "very fast and very cheap".

Jobs at Framestore
Jonathan explained that artists at Framestore are becoming increasingly specialised. Animators animate, modelers model.  Animation in particular is a very demanding role; Framestore is well known for their animation quality and they are "very proud of it. In 2018 Framestore hired almost 30 new animators, taking the department head count to around 150.

For more on the experience of studying at Bucks New University, come and visit us at one of our Open Days,  take a virtual tour of one of our animation studios, check out what our students think of our course, and see why we're ranked in the top 12 creative universities in the UK.
Posted by Alex Williams' Animation Blog at Thursday, June 13, 2019