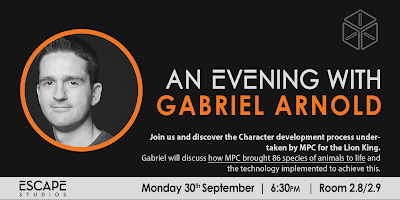 Tonight in Central London MPC artist Gabriel Arnold is giving a talk about the making of The Lion King, the recent Disney blockbuster that has become one of the most successful animated films of all time.

The event is one of a series of "Evening with..." events hosted by Escape Studios at their Central London campus.  As ever, we recommend that any of our students who can attend, do so, as this is a great opportunity to meet in person a lead artist from one of London's leading animation studios, and find out about the reality of the industry pipeline.

Gabriel Arnold
Gabriel Arnold was Groom Lead at MPC, leading the team that created the breathtakingly realistic and believable muscle systems and fur on the creatures who made up the blockbuster Disney re-make.

Realism and believability
The animal animation in the latest re-boot of The Lion King feels so believable that you forget you're watching animation; as you slip into a David Attenborough world so realistic that you are seldom aware the entire film is just pixels.

Gathering Reference
To make the film, MPC first sent a crew to Kenya for 3-4 months, gathering reference footage. The brief for the film was that it needed to look completely real - like a David Attenborough documentary.  The team also went to zoos to learn as much as possible about the animals, and how they behaved. Many hours were spent gathering reference.

CG Environments
There were no matte paintings in the film; everything was a full cg environment. The environments were vast, arguably they are "the biggest star" of the movie.  The MPC artists built over 150 square kilometres of super-detailed set, including over 60 discreet set environments.

This event builds on the August event, an “Evening with El Suliman”, in which MPC lead animator El Suliman explained how the animation team brought the animals to life.

Where and when
Tonight, Monday September 30, at 190 High Holborn WC1, Central London. Nearest Tube: Holborn. Take the Central Line from our Uxbridge Campus and you'll be there in 45 minutes.


For more on the experience of studying at Bucks New University, come and visit us at one of our Open Days,  take a virtual tour of one of our animation studios, check out what our students think of our course, and see why we're ranked in the top 12 creative universities in the UK.