VFX Festival in London Next Week 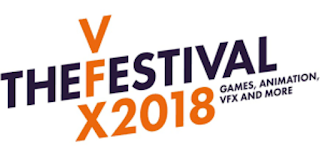 Next week in London Escape Studios are hosting their annual VFX festival, the capital's most important event for animation, games and VFX.

As ever, they have a great line-up of speakers, and there are still a few tickets left.

We recommend that all our students and Escapees attend the VFX Festival; it's a great way to find out the latest news in our industry. Best of all, it's a chance to meet in person some of the recruiters from the big London animation and VFX houses.

So, who is coming?

Steph Anderson, Artist, Creative Assembly
Steph is a vfx artist at Creative Assembly, currently working on the award-winning Total War: Warhammer series, with Warhammer 2 recently released. She graduated from Bournemouth University after studying Animation and Visual Effects for film and transitioned into real time vfx when she started at Creative Assembly as a Trainee VFX artist. She has since contributed to multiple projects, creating effects for spells, characters and environments.

Tom Box, Co-Founder, Blue Zoo Animation
Tom co-founded Blue Zoo Animation and over the studio's 17-year growth the company has become one of the leading CG animation studios in the UK; picking up many awards along the way. Tom sits on the creative fence between the commercials and technology side of the studio and runs the company’s short film programme.

Ryan Jefferson Hays, Design Creative Director, MPC
Ryan is an Australian designer and director with a diverse visual style and a unique range of depth and experience in motion arts and film.  Since joining MPC in 2015 Ryan has worked on a range of high profile commercials, including BMW ‘The Next 100 Years’, Adidas ‘Boss Everyone’ and Audi ‘React’. The latest feature films in his portfolio of work include Morten Tyldum’s ‘Passengers’, Guy Ritchie’s ‘King Arthur: Legend of the Sword’’, Michael Bay’s ‘Transformers: The Last Knight’ and Rupert Sanders’ ‘Ghost in the Shell.’

Carsten Keller, Joint Head of 3D and VFX Supervisor, MPC
With 16 years in the industry, Carsten heads up MPC’s 3D department alongside Anthony Bloor, and is an experienced VFX Supervisor. He started his career in Munich as a 3D artist before joining the MPC Advertising team in 2006, where he works in collaboration with a range of directors including Zack Snyder, Guy Ritchie, and Dougal Wilson.  Carsten’s portfolio of work includes Heineken ‘Prep Talk’ and epic ’The Trailblazers’, Samsung ‘Ostrich’, Avios ‘Anything Can Fly’, EA ‘Messimorphisis’, and Qatar Airways ‘A Team that Unites the World’

Ben Steer, Animation Director, Blue Zoo Animation
Since joining Blue-Zoo Productions Ltd almost 7 years ago, Ben has had the opportunity to work in many roles, from writing and visual development to animation and directing. He's been lead animator and animation director on numerous children's TV series and worked on many adverts and promotions in the Blue-Zoo Creative Services department. Ben has also given talks at events such as SIGGRAPH London, BFX Festival as well as Bournemouth University and Norwich University of Arts. Mamoon is the second short film he has written and directed for the company.

Mohrag Taylor, Technical Artist, Creative Assembly
Mohrag is a Technical Artist, currently working on the award-winning Total War: WARHAMMER series, with WARHAMMER II recently released. She started at Creative Assembly as a VFX Trainee after graduating in 2014, working on her first game Total War: Attila. Since then she’s moved on to technical art, making tools for artists and creating shaders using the studios newly developed in-house shader editor. Mohrag works both with artists and programmers, bridging the gap between art and technical.