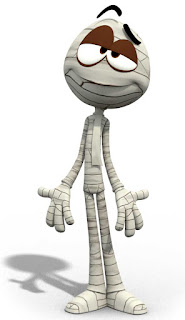 We're liking this cartoon mummy rig named Thep; he's fun and cartoony and you can get a great performance out of him. You can find him here for free download at the Squiggly Rigs official site.

Thep is the first character made with the Squiggly rig system.  Built to allow plenty of flexibility and exaggeration, Thep comes "equipped with some cool features to allow him to act as cartoony as possible without losing appeal".

Thep is a good choice for students starting on acting and lipsync; he works well with a cartoony voice, such as one from the Sesame Street wav archive.

Consider Thep for acting and pantomime shots, or for short dialogue scenes; he has good facial expressions and a wide variety of mouth shapes.


Animation with Thep
To see some nice animation with Thep, check out the reaction shot by Paloma Zhu below.  This is Paloma's interpretation of the "phone booth" exercise, which we cover in week 13 at Animation Apprentice as part of the Online MA in 3D Animation.

For more on the experience of studying at Buckinghamshire New University, come and visit us at one of our Open Days, take a virtual tour of one of our animation studios, check out what our students think of our course, and see why we're ranked in the top 12 creative universities in the UK.