Dream On Silly Dreamer is a film that should be watched by anyone interested in the history of the Disney Studio. Like "Waking Sleeping Beauty", the film that closed out this year's CTN Expo, it chronicles the rise - and eventual fall - of 2D animation in the 1980s and 1990s.  The story is told through interviews with the artists involved, including Disney legends such as Andreas Deja, the creator of Disney characters such as Scar (Lion King) and Jafar (Aladdin). 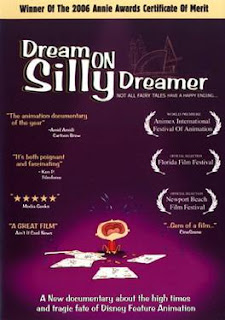 Dream on Silly Dreamer
Dream On Silly Dreamer is a 2005 American documentary film directed by Dan Lund and produced by Tony West.  Lund and West were both special effects animators at Walt Disney Feature Animation, and the film chronicles the rise and fall of traditional animation at The Walt Disney Company from 1980 to 2005.

Golden Age
The late 1980s and 1990s were a golden age at the Disney Studios, when the films kept on getting better and success at the box office followed, incentivising the studio bosses to invest in more and better animated films. Who Framed Roger Rabbit began the Renaissance, followed by The little Mermaid and Aladdin. Then came The Lion King, which made over a billion dollars in 1993, promopting massive industry-wide investment in new films, and big salary raises for the artists.

Many of Disney's greatest animators are interviewed, including Andreas Deja, lead animator on Scar, whose team I was lucky enough to work on during my time on Lion King.

It's a nostalgic film, and in parts it feels like a bit of whinge about changing technology, but overall it's a fascinating insight into what was right - and wrong - about Disney in the late 80s and early 90s.

My own contribution to Disney in those years was to work on Who Framed Roger Rabbit? (1988), Rollercoaster Rabbit (1990), The Lion King (1994) and Pocahontas (1995). It was a privilege to work at Disney during such optimistic times.