El Suliman on The Making of The Lion King

Recently MPC lead animator El Suliman was in London talking about his work on the Disney blockbuster "The Lion King".

El was speaking at Escape Studios, at one of their regular "Evening With" events.  El Suliman was an animation lead on The Lion King, and he animated many of the key shots on the film.

El explained how the animators approached the animation on this hugely complex and ground-breaking movie, which raises the bar for creature animation.

Lion King - Old and New
It was an emotional evening for me as well because, as one of the animators on the original film, I am very proud of the 1993 version, one of Disney's most successful films and still an enduring classic. But, though I hate to say it, the new film is a big leap forwards, employing the best of new technology to pull off a level of realism and believability that we could only dream of in the early 1990s.

MPC
London VFX powerhouse MPC did all the shots on the movie. The animal animation feels so believable that you forget you're watching animation; as you slip into a David Attenborough world so realistic that you are seldom aware the entire film is just pixels.

Reference
To start making the film, MPC first sent a crew to Kenya for 3-4 months, gathering reference footage. The brief for the film was that it needed to look completely real - like a David Attenborough documentary.  The team also went to zoos to learn as much as possible about the animals, and how they behaved. Many hours were spent gathering reference.

CG Environments
There were no matte paintings in the film; everything was a full cg environment. The environments were vast, arguably they are "the biggest star" of the movie.  The MPC artists built over 150 square kilometres of super-detailed set, including over 60 discreet set environments.

The whole film is digital - every blade of grass, every whisker. Apart, that is, from one shot, which was filmed with a camera - the only real shot is the first one - of the sun rising in Africa.

Previz & Camera
At first the artists at MPC built a proxy set, to do the previs on the film. They did previs on entire sequences, with each shot accurate from every angle. The DP was able to move around the set in a VR headset, positioning the camera. However this meant that for animators, their scenes were "very slow" to animate in Maya, because the environments were so heavy.

All the camera moves in the film were based on real camera moves - simulating what could be achieved with a real camera on a real set. Camera lenses were all long-lens shots, because when you are shooting a documentary, you can't get close to the animals. Some of the shots in the movie are the same as the original, mostly pivotal, memorable moments, but the rest is "quite different". 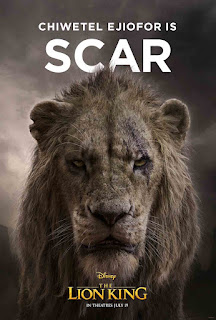 Character Development
Scar took the longest to develop; and the longest to win director approval.  The animators had to sell the character's emotions through their body language; they couldn't use eyebrows and anthropomorphic facial expressions as this would have deviated from the "David Attenborough" brief, and reduced the sense of realism and believability that the director was looking for.

Each lion has its own character; Scar is slower, calmer, more controlled. He moves differently to Simba, who has an adolescent, "cocky" way of moving.  Rafiki was tough to copy; in the first film he was a "crazy witch doctor", but in this film he was more of a "messiah figure".

Test animation
The animators did hundreds of test shots to help develop the characters. Some of this animation could be re-used later - though most shots ended up being hand-keyframed from scratch.

MPC animators started off by animating walk cycles, with full muscle systems, which are "completely accurate", and which get you "95% of the way there; they had a technical animation dept which would "do the last 5%".

The animators copied live action footage to get the best results. Vets and other experts visited the studio to help make sure the animal builds were all completely accurate. The animation team knew they were doing a good job when the experts got confused about what was a real lion, and what was a cg test - they couldn't tell the difference.

Even the grubs had their own test shots to be animated. Run cycles, walk cycles, everything to make sure it was as accurate as possible. All the shots are based on live action reference; everything in film is something that the real animal could do.

Animating shots
Most animators had "four or five shots going at once", leaving everyone with "a lot to juggle".   Some shots took months; one of El's shots took three months to complete, but this was necessary in order to get it just right.

The wildebeest are all hand keyed; it was "impossible to use a crowd system when the director is giving you notes on individual wildebeest".  There was a team of animators just doing wildebeest clips for months on end.

Dialogue and lipsync was done by first animating the jaw, getting the timing right, and then using a muscle-based approach to finesse the lipsync, firing individual facial muscles to make sure that all the shapes would have been achievable by the real animals.

All the hero shots were hand-crafted from scratch, and every animator got to do at least one hero shot, even the juniors.  Lots of training of juniors went on during the course of the film. MPC might host a class on "foot peel-offs", for example, because it's different for each animal.

El Suliman
El Suliman learned animation by studying at home, learning how to animate on his own time, at home. He studied computer science at Kent University, working with one of my old comrades from Who Framed Roger Rabbit, David Byers-Brown.  You can read an interview with El Suliman here.

Breaking into the industry
El recommends that junior animators attend industry events such as Bring Your Own Animation (a monthly free event in Fitzrovia). He also recommends applying for MPC Academy.  Interestingly, El also suggested working as a runner, because once you get in the door you can start doing tutorials and learn from the artists.

Once you're in, you can start learning, and this greatly increases your chances of getting the job you want.  How long should animators stay with a studio? "Stick around as long as you are still learning", El suggested.  And, ask people in the industry for tips; most people in the industry are super helpful, and will take the time to help a newbie.