Secrets of the Spider-Verse at VIEW

One of the main highlights of the recent VIEW conference in Turin, Italy, was a talk by Peter Ramsey, co-director of Spiderman – Into The Spider-Verse.

Ramsay's talk was sub-titled “What Story are You Telling?”, and he showed the audience how the answer to that question informed every frame and every pixel of the Oscar and BAFTA winning movie.

Spiderman – Into The Spider-Verse re-invented the Spiderman franchise, and achieved a unique comic book-style look for the world of Spiderman.  How did they do it? 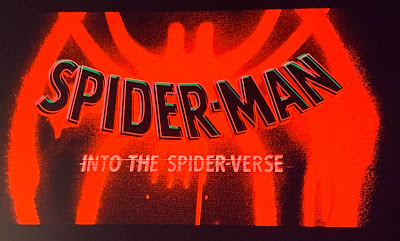 Peter Ramsey
Peter Ramsay was co-director of the movie. He started out his career as a storyboard artist, and then later on became a 2nd unit director. His many film credits include Fight Cub and Dracula.  He also directed Rise of the Guardians at DreamWorks.

On Spiderman, Ramsay was quick to point out that he didn't work alone - over 800 people came together to make the film.  And it was a tough road. As he put it: "all films look easy once they are done, but the process was full of doubt and uncertainty". The film eventually won the Oscar and the BAFTA for Best Animated Feature Film, but all that came later.  Initially, the key question you have to ask at the start of the process is: “what story are you telling?”. This is the question that informs everything in the film.

At first, everyone said “we’ve seen Spiderman, and we don't need to see it again”. But then they thought, "what if we based the movie on Miles Morales?" That would make it look different, and potentially interesting.  Miles Morales was introduced into the Spiderman universe in 2011; he is a remix of the Spiderman character with a new ethnicity; he's an "Afro-Latino kid from Brooklyn; he’s 13 and both his parents (unlike Peter Parker) are still alive". 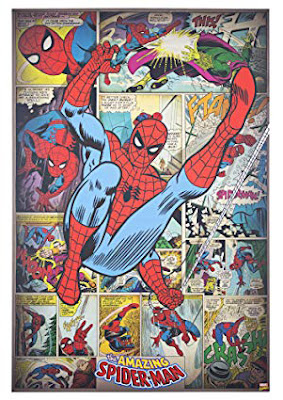 Source Material
So the team went back to the comic books – the original source material. And, because they were making an animated film, they could do this in a way that live action features cannot do. Comic book images are bold, they “jump off the page at you”.  They include sound effects, word balloons, splash panels, half-tone dots. How could the film-makers use the visual language of comics to set this film apart?

Lighting and Rendering
They also had to make choices with the lighting and rendering, and they thought: "let’s render light differently, to give the movie a hand-made feel". Their customised render script was used to "depart from photographic reality" to give the impression of something that was an intense version of reality, and hand-drawn.

They made sure that “the imperfections of comic books should be part of our language.” Ink lines bleed, colour isn’t perfect - because the early comics especially were cheaply produced on low-quality newsprint. 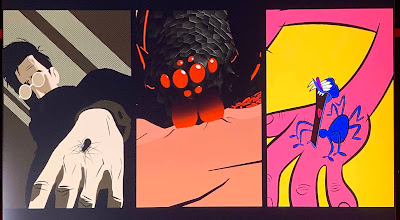 Motion blur and speed lines
Comics are still images, so the film-makers made the choice early on that there would be "no motion blur" in the movie; instead they wanted a "clean graphic look". So they instead of motion blur put graphic shapes and motion streaks as a substitute.

Once Miles is bitten by the spider, comic book visual conventions such as word balloons get introduced into the film, to show that Miles is entering a different universe – the Spider-verse. And, to accentuate a moment, they might suddenly “pop into comic book frames”, to make it feel more visually striking. There are many influences from numerous legendary comic artists; comic book fans will appreciate the specific influences, and general audiences will feel as if they are in an authentic comic book world.

One visual struggle was how to get the “beautiful black india ink lines” from the comic books into the film? Somy Imageworks devised a special program to include motion lines on the character, or “form lines”, which helped to stylise the 3D images. This program was used by the animators to make the characters feel more graphic and two-dimensional. 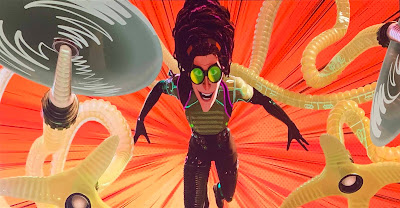 Ones -vs- Twos
The film was also "animated on twos" (meaning that every second frame was deleted). Bob Persichetti, who trained with legendary Disney animator Glen Keane, was a strong advocate of this idea. However,  the camera and background elements needed to be rendered on ones, to make the film feel smooth, but the characters themselves moved on twos.

The idea was to “hold strong, dynamic poses as long as possible” and, with no motion blur, but “motion smears”, they recreated the feels of a 2D movie. In addition, the animators had sculpting tools so that many shots could be "sculpted for the camera" so that each pose "looked as much like a graphic comic book pose as possible". The lighting is real, or leaning towards real, but it’s a “maxxed-out version of reality, like a comic book”.

Story, Story, Story
The story of the film hinges on Miles’ family drama; the struggle between Miles’ father and Uncle for their influence over the young Miles.  The family needed to have "charm and appeal, but with a contemporary edge".

Miles is "a young kid of colour who is growing up in Brooklyn, who is going to become SpiderMan". As Peter Ramsay put it "this is not a normal thing; but the source material already had created the character, so all the film-makers had to do was lean in to this reality".

Miles is born into a bluecollar family, they are both carers and protectors. Miles’ dad is a cop, a loving but disciplinarian character.  His Mom is a Puerto Rican nurse.  And his uncle Aaron is also an important influence on him. The idea was to make the characters "feel authentic and real, as life in Brooklyn actually is". The movie is about "leaving home and finding your place". And, "it’s a New York movie". So the team did "tons of research, to pick up as many street details as possible, that they could use in the film".  Even Milo's dorm room had to feel "as much like a real dorm room as possible"; it needed to have "the texture of life".