An interview with the Danish creators of The Interview

How do you make a great animated short film? Getting a group of students to come together and collaborate on a group project can be tough, but when it works well, the outcome can be much more impressive than a solo project. Students at university tend to get used to working alone, and the discipline and co-ordination required by a group endeavour are hard skills to master. But, if the project is done right, with each person pulling their weight, the results can be stunning.

One of this year's most successful films from The Animation Workshop in Denmark is Interview, a funny and surprising film with a delicious twist. We asked two of its creators, Mikkel Okholm and Mikkel Brons-Frandsen, to talk about how it came about. 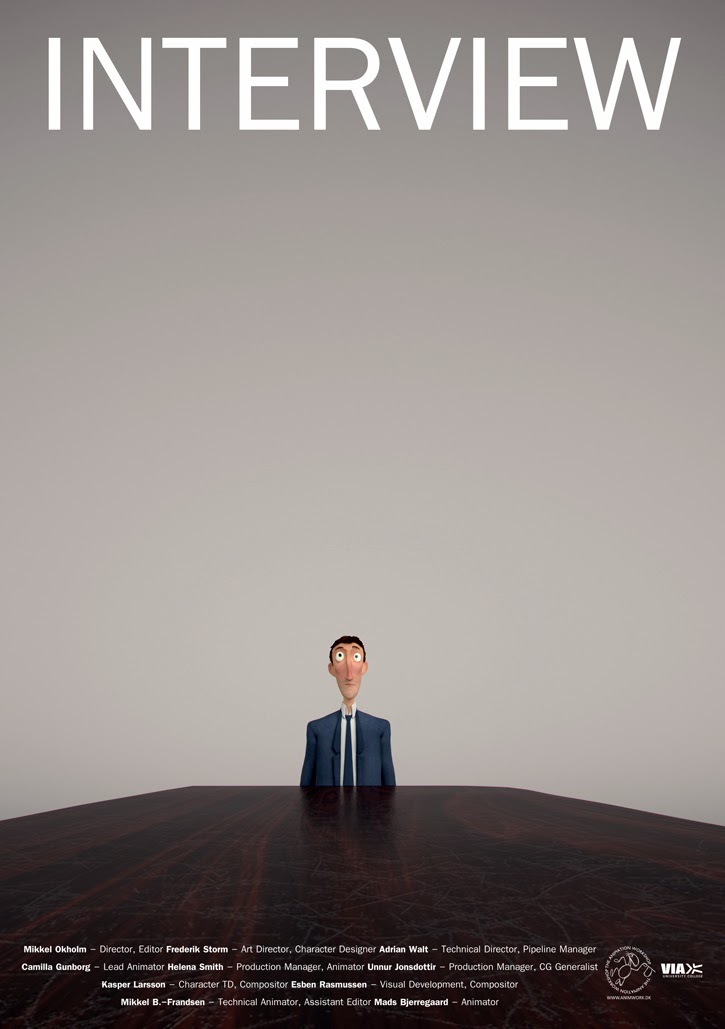 Bucks: Whose idea was the project?

Mikkel Okholm:
The idea for this short was something I came up with together with Frederik Storm and Kasper Larsson. We wanted to work on something together, so we sat down and brainstormed many different ideas until we had one idea we wanted to make. Together we pitched the idea to the rest of our classmates and a panel of professionals working in the animation industry. After it was selected, I took over the project as director and continued the development over the summer holiday.

Bucks: How did you decide who would handle which roles?

The only role, which was decided at the beginning of the project was that of the director. From the beginning, Frederik and Kasper had said that they didn't want to direct, so the role was given to Mikkel.

Later, when we moved into the development and pre-production, the entire team sat down and discussed our strengths, weaknesses and what we would like to get out of the production, personally and professionally. In some cases our role was obvious, as for example Esben Rasmussen's role as concept artist because of his skills as a painter, Frederik Storm's role as art director and character designer because of his hilarious drawings and Adrian Walt's role as technical director because of his expertise in efficient pipelines and programming experience.

Some other roles were distributed on personal interest. Kasper Larsson, although very able, wanted to get more familiar with rigging and also look into programming languages and therefore was assigned the role as character technical director. Unnur Jonsdottir was equally skilled in many disciplines and did not want to take on one specific task - and was therefore assigned the role as CG generalist.

There was some uncertainty regarding who should be assigned the role as lead animator. Both me and Camilla Pedersen were equally skilled in terms of animation but we each had our own ideas about how the characters should perform. This role was therefore assigned later in the process, when the story had been developed further and we all had had a chance to see how we worked together. After this period Mikkel, Camilla and myself sat down and discussed who should fill the role. In the end we agreed that Camilla should be in charge of the animation style because of her funny ideas and ability to portray emotions in a comedic way which fitted the style of the film. I was assigned the role of technical animator and were to serve as the link between the animators and the CG artists because of my knowledge of the technical aspects such as rigging.

Bucks: What was the process of developing the story?

MO:
It was a very confusing process and we had many very different ideas and very developed versions of the story before we landed on the one that eventually became the film. We started out with a version that was heavily influenced by the original story of creation taken from the bible and our story included both the devil and Eve.

In the beginning we had all agreed that the meaning behind our film should be that human beings are unfit to be the dominant species, but somewhere in the process the story had turned into something else entirely. It now gave the feeling that we were gunning for women as we had Eve being the one who let the snake into paradise - and this was not at all what we intended.

At a late point in the pre-production we were advised to take a step back and rethink the story we had so far. This meant that we cut out a lot of characters and environments that only served to confuse the viewer. After this process of cutting back we had a much more minimalistic direction but still with many issues to resolve.

From this point we worked towards a common goal and a much clearer direction, which is essentially what you want when you work on any group-project. However, it was fairly late in the process to reach this conclusion so I feel that some aspects of the story could have benefited from a little more development.

Bucks: What were the biggest challenges in getting it done?

MBF:
Because we had spent so much time on creating two seperate stories - and two animatics - rather than one, we were under pressure right from the start of production. When we went into production we were all working with half finished rigs and scattered scenes as all of these were still in development. We therefore had to work on different steps and leave half done animation in some shots and move on to the next. We would then return later and carry on as the shots became ready for finished animation.

For example, the animation on Adam's tie were the last thing we added, one day before the deadline. The expression sheets were also still in development and we did not have a complete picture of our characters yet. The test animation and the finished animation ended up overlapping a bit and one of the scenes in the film, is actually one of my test animations.

MO:
I also think that one big challenge was communication and group work. We were all very good at talking to each other and we had a really nice atmosphere in the room in general, but sometimes we had our clashes and the challenging part was definitely to keep your head high and be able to talk about things when times are tough.

Of course there were a lot of technical challenges as well, but the thing about technical issues is that there is always a tangible solution for them in one way or the other. And I also think that we were very good at foreseeing a lot of these issues before they got out of hand.


Bucks: What was the biggest lesson you learned along the way?

MBF:
One of our biggest challenges and also some of the reason why we ended up with two different versions of the story was that, in the beginning, everybody would have a say about every aspect of the production.

Mikkel Okholm took everyone's opinions seriously and tried to get as much input as possible which took the project in many different directions all at once. We even had a musical segment with a dancing demon at one point. This led to the decision that we would have to split up more and work on each our part of the production and this really speeded up the process and gave a much more consistent result. Hierarchy in a production is a really good idea, and we benefited a lot from respecting it.


MO:
Yes, I can only second that. The moments when the production ran smoothest was the times where we all respected and understood the meaning of the hierarchy. Because this freed up everybody to focus on what they were meant to do, according to the roles we had divided.

It was a strange transition because we came from being in the same class with someone teaching us, to be in charge of everything ourselves and this took a little while to get used to.


Bcuks: What advice would you give to anyone trying to finish a short film?

MO:
It's hard to give advice when you only have one film in the bag. But some of the key things I have learned during this project is to be clear about the story and direction before involving a lot of other people on the project. And also, that good communication is alpha and omega when it comes to creating something together and that it can either make a project or break it. And lastly, don't give up. Even when things look dark you have to keep pushing through.

(Editor's note: For more about The Animation Workshop, read about their new BA in Graphic storytelling, check out what London animator Marc Stevenson had to say about his visit there, read about the Saga of Bjorn, the inimitable Space Stallions, and the excellent Tumblehead Animation studio in Viborg. )
Posted by Alex Williams' Animation Blog at Tuesday, February 11, 2014