Who Framed Roger Rabbit was released in the summer of 1988, making the movie 31 years old this year.  Last week at Disney in Los Angeles we had an informal reunion with some the people who worked at the film, hosted in the Rotunda Building by Disney marketing head Howard Green.  Lead animator Andreas Deja was there, as well as Burny Mattinson, officially the longest serving employee of The Walt Disney Company,  Producer Max Howard, Charles Fleischer, the voice of Roger Rabbit, Ross Anderson, who has written the history of the film, animator Nik Ranieri, and me.

Pulling a Rabbit Out of a Hat 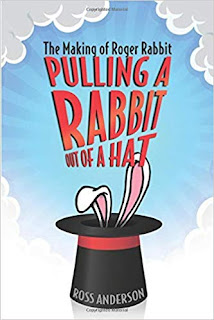 Many of the artists were in town for last week's Creative Talent Network (CTN) Expo, the annual gathering of animation talent organised by former Disney artist Tina Price.

Author and animation historian Ross Anderson was there promoting his recently-published  book - Pulling a Rabbit Out of a Hat - The Story Behind the Making of Who Framed Roger Rabbit? which aims to be the definitive story of the making of the film.

Making of Roger Rabbit Blog
To get a feel for the book, and to see what the content is like, Ross has put together a website full of stories about the making of the film.

Some of my favourite posts include this one about the ACME warehouse, filmed in a bus shelter a short walk from my own house in London.

In-Betweener
My job on Who Framed Roger Rabbit was my first job in the industry. It was 1987, and I was 20 years old.  I was at university at the time and I started out on the film working for free over my Easter holidays, what would now be called an unpaid internship. I began work as an "in-betweener", the trainee artist who did the "in-betweens"; the drawings that the animator didn't have the time or inclination to do.  After a while they started to pay me, and later I became a full-time assistant animator.  By the time the project was over I had been assigned some animation of my own, mostly on crowd shots.

Rollercoaster Rabbit
Two summers later, in 1989, I got to work on RollerCoaster Rabbit, a short film made at the Disney Studio in Florida, under the careful guidance of director Rob Minkoff. You can see a couple of shots below.

Breaking into the animation industry
Despite all the changes in our industry in the last 30 years, some things remain the same: it is still the case that, as a junior artist, your best chance of landing that elusive first job is to find a big production that is crewing up and needs a lot of artists.  To read more about getting hired in into the animation industry - read this blog post.

Ross's book
You can buy Ross's book in hardback or paperback at amazon.co.uk.