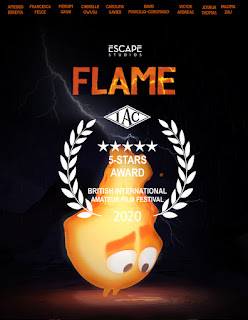 "Flame" has been competing into multiple film festivals, but this is its first festival win.

Flame is a short film produced by BNU student Amedeo Beretta, currently studying for our online MA in 3D Animation.  On a dark night in the desert, Flame is born, but she soon realizes that the storm that brought her life is now a threat to her survival.

Amedeo is an animation tutor at Escape Studios in London, and Flame is a project completed by his students, carefully overseen by him, and is an excellent example of the superb work being done by our online students at Bucks.